A man named Bittner is on the run from two mysterious men who kill him after he sends a message to Gabriel. It turns out Bittner had a tape with evidence convicting the mysterious men and their organization of some major murder. Gabriel and Sara recover the tape, are forced to shoot two of the men who are government types, and go on the run while Sara has visions of a mysterious Boston-accented talking to her about politics and evil. Sara ends up captured by the conspiracy, who are a mysterious cabal who plan on taking over the U.S. She escapes but the conspiracy lets her live in return for a favor, and returns the captive Gabriel to her. At the end her mysterious ghost/man reveals himself as John F. Kennedy before disappearing. 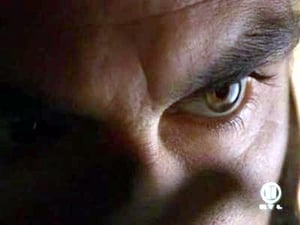