Hondo and the SWAT team spread out across Los Angeles in pursuit of four escaped convicts, including a violent criminal Jessica helped bring to justice, before department rival Mumford and his team beat them to the collars. Also, Hondo’s new role as team leader is called into question when Street displays a flagrant disregard for SWAT protocol. 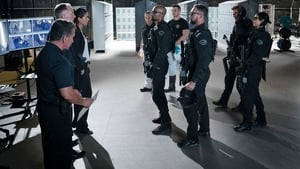